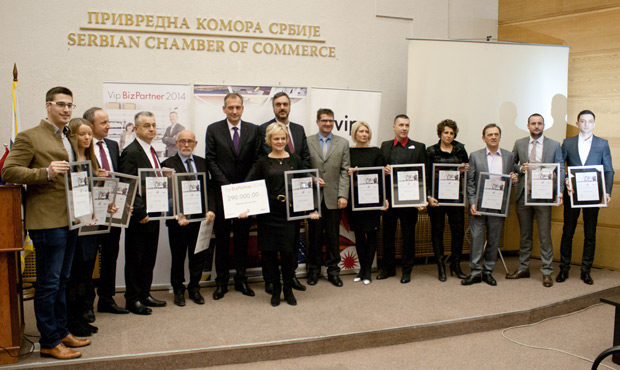 Around RSD 900,000 for family companies:  Akvapan, Geourb Group and Mali podrum Radovanović are the winners of the Vip BizPartner 2014 competition.

Companies Akvapan from Čačak, Geourb Group from Belgrade and Mali podrum Radovanović from Krnjevo are the winners of this year’s competition and the reward Vip BizPartner 2014, which was awarded for the second time today.

This is the second time that the Vip BizPartner 2014 recognition has been awarded to representatives of the most successful family companies in Serbia by the Vip Mobile company, in collaboration with Chapter 4 and with a support of the Chamber of Commerce of Serbia. Money awards in the total value of RSD 900,000 have been awarded to three most successful domestic family companies, and ten more companies have received recognitions for exceptional performance, innovation and sustainable development.

Another 10 companies received the Vip BizPartner 2014 recognitions. Although recording a lower growth rate then the first three, these companies have made a record of performance with recognisable investment in education and development, as well as efforts to overgrow the current status. The awarded companies are: company dealing in sale of flight tickets Flyfly Travel, producer of dietetic products and natural beauty products Herba svet, producer of exclusive furniture Linea Milanović, company dealing in digital print and graphic design No-kači, producer of roof and façade coverings Pan komerc, family dairy Veličković, company dealing in graphic printing Pre-print, company trading in construction material  Tehnokomerc, producer of water metersss  Vukas and Andrejević goldsmiths.

The three-member jury was made of Milena Avramović Bjelica, executive director of Chapter 4 agency, Nataša Kecman of the Chamber of Commerce of Serbia and the president of the jury Vojislav Lalić, director of Sector for development of business products in Vip Mobile.

‘The competition was strong and it was not easy to select 13 companies among the 40 listed family companies, most of which are recipients of Excellent SME, the electronic certificate of viability issued by the Serbian Chamber of Commerce and the international insurance company Coface. However, our decisions were unanimous, based on thee overall business performance and taking into special consideration the growth in the number of employees and income, as well as the sustainability of growth and use of highly sophisiticated technologies’, said Lalić.

The rewards to the winners of the Vip BizPartner 2014 competition were presented at the ceremony held today in the Chamber of Commerce of Serbia by Dejan Turk, director of Vip Mobile, Marko Čadež, president of the Serbian Chamber of Commerce and Dr Miloš Petrović, Secretary at Ministry of Economy.

“We supported the Vip Family Company  project with great enthusiasm, because we recognised on one hand its innovative and quality approach, and on the other hand we were aware of the market need for stronger entrepreneurship within small and medium-sized companies. We believe that this proves we are on the right track and this project has really made some changes in this segment of the industry which is also supported by the considerable interest in the scheme, engagement and motivation of the entrepreneurs who take part in our workshops, as well as by the support given by the Serbian Chamber of Commerce and the regional chambers and business associations in our project,” said Dejan Turk, director of  Vip Mobile.

Marko Čadež emphasised that the importance of family companies is best reflected during the period of economic crises, which has seen large multinational companies letting off workers, while small companies were the only ones who continued to grow and increase their number of staff. The president of the Serbian Chamber of Commerce said that the significance of family companies does not lie only in their contribution to the economy, but also in their inherent dedication to the local community and the values they promote.

Miloš Petrović, Secretary in the Ministry of Economy added that the strategy for development of small and medium-sized companies places its focus on family companies, which account for two thirds of overall national employment and turnover. Petrović pointed out that only 2% of the total 315,000 businesses in Serbia are large companies, whereas the remaining part are small companies who need to be supported.

The jury also explained that all of the awarded companies are healthy family businesses with solid business operation, generating an increase in income and number of employees, while also making investments into staff and technology. The three recipients of the money award also make investments into high technology and have expanded their operation into new markets. The Čačak-based Akvapan company has been active since 1993 and deals in the production of pipes, with significant exports in the market of Bosnia and Herzegovina, Macedonia, Albania, Monte Negro, Bulgaria, Greece and other countries.

The Belgrade- based company Geourba Group deals in the design and construction works in the domain of geodetic, geo-technological and urban planning works. The deputy director Saša Milneković said that the company was initially started by her father and has now been active for twenty years, managed by herself and her sister, being the second generation of company leaders. “The plan is to grow and expand the current number of 20 staff, despite the not-so-favourable economic conditions in the environment. The Law on Public Procurement has unfortunately allowed joint bids, making it possible for several companies of dubious reputation to appear together and suppress healthy and reputable companies,” said Saša Milenković.

The Small Cellar Radovanović from Krnjevo produces around 200,000 bottles of wine per year, from the grapes grown on its plantations covering around 27 hectares of land. Making a statement of eKapija, the owner Miodrag Radovanović points out that his company was among the pioneers of small-scale production of wine in 1990, so that now the family business brings together three generations of the family, helped by their neighbours who –as Mr Radovanović points out – are also considered the family. The wines made by the winery at the heart of Šumadija bear the marking of geographic origin.

After the awards ceremony, representatives of the family companies from different parts of Serbia attended a lecture titeld Challenges ahead of Family Companies, held by Boris Vukić of Adižes Institute.